Low-Carb Eating for Diabetes Is Taking Off in the U.K.: Dr David Unwin Explains

Posted on November 20, 2019 | Comments Off on Low-Carb Eating for Diabetes Is Taking Off in the U.K.: Dr David Unwin Explains

The Diet Doctor website posted a video interview of Dr David Unwin (in the U.K.) discussing his experience with low-card diets in folks with diabetes (type 2, I assume). If  you’re short on time, just read the transcript. Thanks, Diet Doctor!

I took note of Dr Unwin’s transformation from a run-of-the mill follow-the-herd practitioner to a low-carb advocate. This happened around 2012 when Dr Unwin was 55 years old and on the threshold of retirement. Here it is:

Dr David Unwin speaking: ….There was one particular case I’ve talked about before where there was a patient who – so in 25 years I’d never seen a single person put their [type 2] diabetes into remission, I had not seen it once. I didn’t even really know it was possible.

Dr Bret Scher speaking:  We were not [taught] that it’s possible.

Dr Unwin:  No, my model was that the people with diabetes… It was a chronic deteriorating condition and I could expect that they would deteriorate and I would add drugs and that’s what would be normally going to happen. And then one particular patient wasn’t taking her drugs and she actually went on the low-carb diet and put her diabetes into remission.

But she confronted me with, you know, “Dr. Unwin, surely you know that actually sugar is not a good thing for diabetes.” “Yes, I do.” But then she said, “But you’ve never once in all the years mentioned that really bread was sugar, did you.” And, you know, I never did. I don’t know what my excuse was. So this this lady had done this wonderful thing and she’d also changed her husband’s life as well.

She’d sorted his diabetes out and she’d done it with a low-carb diet and that really made me think I didn’t know much about it. I didn’t know much about it. So I found out what she’d been on… on the low-carb forum of diabetes.co.uk and to my amazement there was 40,000 people on there, all doing this amazing thing. And I was blown away but then I was very sad because the stories of the people online were full of doctors who are critical of these people’s achievements.

At no point does the transcript indicate they’re talking about type 2 diabetes rather than type 1, but that must be the case. Nor does it mention the amount of required carbohydrate restriction. I figure it’s between 20 and 100 grams/day of digestible carbohydrate, depending on one’s metabolic health and how many years of diabetes. 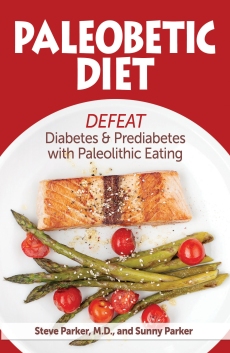 This entry was posted in Dietary Carbohydrate, Low-Carb. Bookmark the permalink.