Posted on March 24, 2017 | Comments Off on Recipe: Rosemary Roasted Brussels Sprouts and Onion

At my request, my wife bought me a mess o’ Brussels sprouts, and I’ve been experimenting with recipes.

Sprouts sliced in half

Ingredients this time are the sprouts, dried rosemary (i.e., not fresh although it’s a landscaping plant where I live), salt, pepper, extra virgin olive oil, fresh garlic, and diced onion.

FYI, rosemary is used as an ornamental landscaping plant in southern Arizona.

To promote release of flavor, I sautéed three garlic cloves and the rosemary in EVOO.

Then I sliced the sprouts in half along their long axis, to reduce cooking time. (Cut them so the leaves stay attached to the internal stalk.) You’d have to cut them in half before you eat ’em anyway.

I dumped all ingredients into a bowel and mixed thoroughly to ensure the sprouts were coated with oil.

Ready for the oven. I used about 3/4 cup of diced onion.

Everything except the bowl was transferred to a cooking sheet covered with aluminum foil (easy clean-up!), which I then popped into an oven pre-heated to 425°F. I cooked for 25 minutes. At around the 10 and 17-minute marks, I pulled the concoction out of the oven and stirred/flipped the ingredients to promote even cooking and browning. Your cooking time will vary from 17 to 25 minutes depending on your preferences. If you want some browning of the sprouts, you likely need to cook longer than 17 minutes. Unless your oven runs hotter than mine.

This is my favorite roasted Brussels sprouts recipe thus far. For an extra flavor zing, sprinkle with some Parmesan cheese just before eating. In the future, I may  top the ingredients with some other type of cheese a minute before the cooking is completed. Of course, if you eat pure paleo, you don’t eat cheese. Bacon bits are another tasty option.

Not “real” Parmesan from the Parma region of Italy. For example, this one contains cellulose “to prevent caking.”

Comments Off on Recipe: Rosemary Roasted Brussels Sprouts and Onion

How To Roast Asparagus and Brussels Sprouts

Posted on March 31, 2013 | Comments Off on How To Roast Asparagus and Brussels Sprouts

The finished product: 14 oz of asparagus and 7 oz of Brussels sprouts yields 5 or 6 servings

This is easy.  I use the same method to roast potatoes.

Cooking asparagus is a little tricky. Allrecipes.com has a short video you may find helpful. The thick end of the stalks can be woody, especially on the larger spears, so you need to cut them off or use a potato peeler to shave off some of the “wood.” Or just by the smaller spears.

Rinse off the veggies then let them dry. Brush with extra virgin olive oil then salt and pepper to taste. Sprinkle with other herbs or spices if you wish. Layer them on a baking sheet covered with aluminum foil. Cook in the oven for 10–12 minutes.

It doesn’t seem fair to the other vegetables that we capitalize Brussels sprouts.

Have you noticed that asparagus alters your urine’s odor?

If you start with 14 oz of raw asparagus, you’ll end up with four servings.  Each serving has 40 calories (half of which are fat from the olive oil), total carbohydrates 4 g, fiber 2.2 g, and digestible carb 1.8 g. 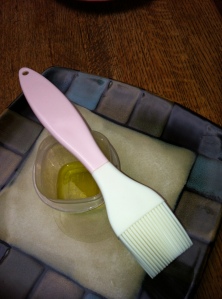 Comments Off on How To Roast Asparagus and Brussels Sprouts