Eggs and Portobello Mushrooms for Breakfast?

That looks scrumptious to me! (That’s a word, right?) And it’s fairly paleo-compliant.

My wife and daughter would never try this. There’s just something about mushrooms, they say. Can’t even stand the smell.

Posting this here for future reference. Just a matter of time…

Periodically there are outbreaks of illness caused by eating contaminated leafy greens. The contaminants are usually bacteria such as E coli and Salmonella. The illness is typically diarrhea, sometimes with belly cramps, nausea, and vomiting. And rare deaths.

Cathe Friedrich published an interesting article about this phenomenon. Here are a few bullet points (I haven’t independently verified):

Click for a harrowing story at Consumer Reports about E coli poisoning from romaine lettuce.

Consumer Reports article on the safest ways to eat salad.

Posted on May 26, 2022 | Comments Off on Recipe: Japanese-Style Avocado and Salmon Salad

This looks and sounds intriguing but I haven’t tried it yet. I’ve never combined avocado and salmon in an entree. I never imagined I’d like avocado in chicken soup, but it’s become a Parker Compound favorite.

PS: I couldn’t find the nutrition breakdown at Tesco Real Food, but Jan came up with this:

Comments Off on Recipe: Japanese-Style Avocado and Salmon Salad

I assume the word rhymes with waffle. No, it’s not chicken and waffles. From Diabetes Daily:

If you haven’t heard of the term “chaffle” yet, are you really living? The latest craze has taken the diabetes online community (DOC) by storm. One moment I was inquiring about what exactly a chaffle was, and the next, I found myself a golden ticket to an underground world with over 100,000 keto-crazed chaffle fanatics! What is a chaffle you ask? A chaffle is basically a cheese and egg alternative to bread, cooked in a mini (or regular, just adjust recipes accordingly) waffle maker that can be used for anything from breakfast foods straight through your after-dinner treat. It basically acts as a base to any creative concoction you can conjure up. Why are people with diabetes so excited about chaffles? Well for one, those of us who love to experiment with new low-carb options now have this new blank canvas to create from. But more importantly, this latest invention can also help keep your blood sugars in check straight from morning till night!

Source: 5 Chaffle Ideas to Get You from Breakfast to Dessert – Diabetes Daily

Comments Off on What’s a Chaffle?

Have You Considered the Lowly Rutabaga?

Jan over at The Low Carb Diabetic is getting me motivated to try a new vegetable: rutabaga.

“The picture above shows what Americans know as “rutabaga”. The Scottish call it “neeps” and serve it with haggis. I know it as swede, a fairly recent root vegetable, which is thought to have originated around the 17th century in Bohemia. In 1620 a Swiss botanist described the root vegetable, believed to be a hybrid of the cabbage and the turnip. By 1664 it was growing in England. A good source of vitamin.C, fibre, folate and potassium. It’s low in calories.”

Source: The Low Carb Diabetic: Swede / Rutabaga : How will you serve this low carb vegetable

PS: If the copyright owner of the rutabaga photo wants me to take it down, contact Steve Parker, M.D., and it shall be done posthaste.

Posted on March 24, 2017 | Comments Off on Recipe: Rosemary Roasted Brussels Sprouts and Onion

At my request, my wife bought me a mess o’ Brussels sprouts, and I’ve been experimenting with recipes.

Sprouts sliced in half

Ingredients this time are the sprouts, dried rosemary (i.e., not fresh although it’s a landscaping plant where I live), salt, pepper, extra virgin olive oil, fresh garlic, and diced onion.

FYI, rosemary is used as an ornamental landscaping plant in southern Arizona.

To promote release of flavor, I sautéed three garlic cloves and the rosemary in EVOO.

Then I sliced the sprouts in half along their long axis, to reduce cooking time. (Cut them so the leaves stay attached to the internal stalk.) You’d have to cut them in half before you eat ’em anyway.

I dumped all ingredients into a bowel and mixed thoroughly to ensure the sprouts were coated with oil.

Ready for the oven. I used about 3/4 cup of diced onion.

Everything except the bowl was transferred to a cooking sheet covered with aluminum foil (easy clean-up!), which I then popped into an oven pre-heated to 425°F. I cooked for 25 minutes. At around the 10 and 17-minute marks, I pulled the concoction out of the oven and stirred/flipped the ingredients to promote even cooking and browning. Your cooking time will vary from 17 to 25 minutes depending on your preferences. If you want some browning of the sprouts, you likely need to cook longer than 17 minutes. Unless your oven runs hotter than mine.

This is my favorite roasted Brussels sprouts recipe thus far. For an extra flavor zing, sprinkle with some Parmesan cheese just before eating. In the future, I may  top the ingredients with some other type of cheese a minute before the cooking is completed. Of course, if you eat pure paleo, you don’t eat cheese. Bacon bits are another tasty option.

Not “real” Parmesan from the Parma region of Italy. For example, this one contains cellulose “to prevent caking.”

Comments Off on Recipe: Rosemary Roasted Brussels Sprouts and Onion

Posted on March 18, 2017 | Comments Off on Recipe: Roasted Brussels Sprouts and Radishes

A year ago I ran across online praise for roasted radishes. I’m not a big fan of radishes, perhaps because they weren’t part of Parker family cuisine when I was growing up, but I finally gave them a try.

This won’t be as detailed as most of my recipes because I need to get into the hospital soon.

With the radishes, I cut off the little rootlet and green top, then cut them in half unless they were tiny radishes. Brussel sprouts take longer to cook, so I cut them in half, too. I put all the veggies  into a bowl, added just enough olive oil to coat them, sprinkled in some salt and pepper, then mixed with a spoon. Then I spread all that on a cooking sheet and popped it into an oven pre-heated to 425°F. (I covered my cooking sheet with aluminum foil to ease cleanup.)

All ingredients mixed in a bowl

I cooked in the oven for 17 minutes (15-20), using a turner to flip the veggies once or twice while cooking.

They were a little bland, so I topped off with Weber Roasted Garlic and Herb Seasoning. I enjoyed them and will do it again. Next time I may try coating with melted butter rather than olive oil. I felt very virtuous for eating my vegetables.

PS: I ate half of this in one sitting. I refrigerated the rest and ate it about six hours later, after warming in the microwave. It was much more flavorful. If you’re one of those people who never eats leftovers…

Comments Off on Recipe: Roasted Brussels Sprouts and Radishes

We Unboxed an Anova Precision Cooker

Posted on February 20, 2017 | Comments Off on We Unboxed an Anova Precision Cooker

My wife got interested in the sous vide cooking method eight months ago. She gave her original Anova cooker away to someone and replaced it with another brand that broke and shocked her, literally. We just got our new Anova and did this unboxing video. I’m told that unboxing videos are “a thing.”

We’ve noticed in our corner of the universe that steaks are getting more expensive. Sous vide cooking allows us to use a cheaper and tougher cut of meat and it comes out very tender. The method often yields foods that are also more flavorful and juicier compared to other cooking styles.

Comments Off on We Unboxed an Anova Precision Cooker

Posted on January 20, 2017 | Comments Off on Check Out DietDoctor’s Improved Low-Carb Recipe Collection

They’ve always been good recipes—accompanied by all-important nutrient analysis—but they’re even better now. They’re not necessarily paleo-compliant, but many of them are.

“Our low-carb recipe site is probably already the most popular one in the world, with over 100,000 daily pageviews, several hundred recipes and gorgeous images. Now we’re adding even more great functions.You can now change the number of servings for recipes – the ingredient amount will correspond to the number of servings – and you can now also choose between the US or the metric measurement systems for ingredients. All to make it simpler to use our recipes.

We’ve also added a function for members so that it is now possible to save your personal favorite recipes. To activate the latter feature you need to be logged in, so that your selections can be saved for later.”

Posted on December 6, 2016 | Comments Off on Free “Paleo Asian Cookbook” From Alfie Mueeth

Author Alfie Mueeth tells me via email that his new recipe book will be available for free “tomorrow.” I don’t know what time zone Alfie’s in, so I don’t know when tomorrow starts and stops. Tomorrow for me is December 7.

The link Alfie gave me is https://www.amazon.co.uk/dp/B01MPX9QNF?utm_content=buffer46c9c&utm_medium=social&utm_source=twitter.com&utm_campaign=buffer 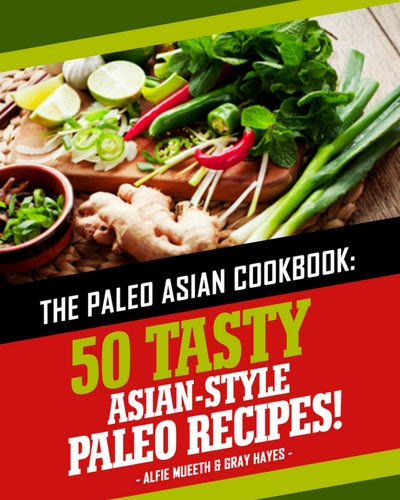 Comments Off on Free “Paleo Asian Cookbook” From Alfie Mueeth