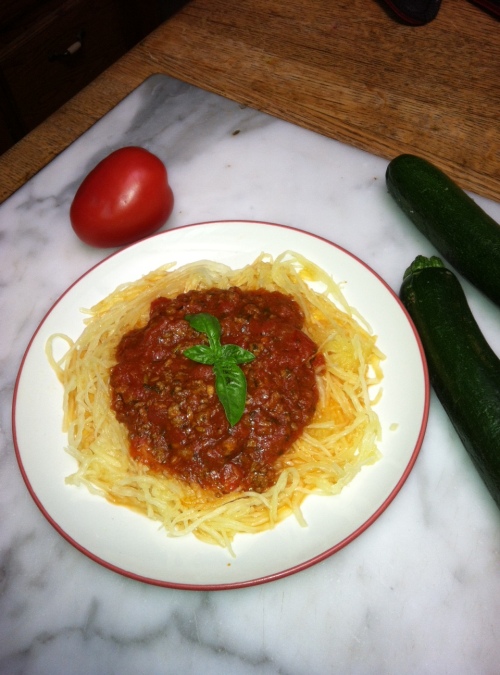 Yeah, I know. Spaghetti’s not paleo.

But this one is. Recently here we’ve looked at low-carb spaghetti sauce and cooking spaghetti squash. It’s not too much of a stretch to put them together and call it spaghetti. No grain-based pasta here! 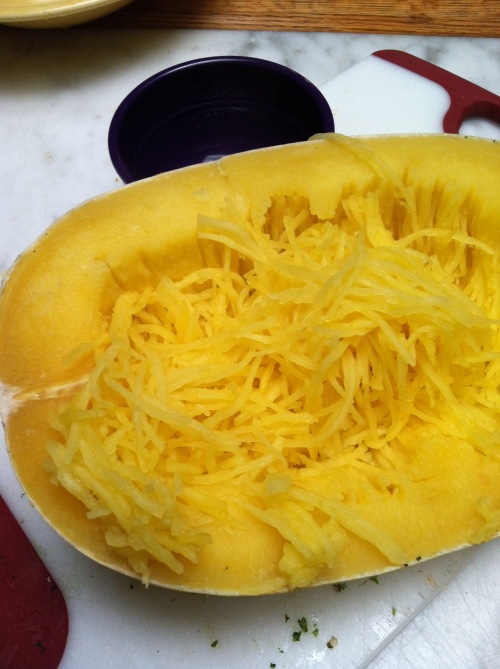 Prepare the ingredients after clicking on links above. Assemble as in the photo. Enjoy.

Prominent features: Rich in B12, copper, iron, niacin, thiamin, B6

With the Paleobetic Diet, I strive to limit mealtime digestible carbohydrates to 20 g or less. This meal has 29 g and the calories are on the low end (408) for larger and more active folks. What gives?

Making a wholesale switch from the Standard American Diet to the paleo diet ican be difficult for some under the best of circumstances. For those used to eating carb-heavy pasta, I thought it might be comforting to offer something similar but with a lower carb count. Hence, spaghetti pasta. The tomatoes in the sauce are an additional source of blood glucose-elevating carbohydrates. So I’ve tried to minimize them by creating a meat-heavy sauce. Nevertheless, a reasonable portion size tipped me over the 20 gram carb limit. In contrast, a single cup of cooked spaghetti pasta by itself has 40 grams of digestible carbohydrate and 220 calories.

I think you’ll find the two cups of spaghetti squash filling and satisfying. If that’s not enough calories for you, munch on some leftover high-protein food such as chicken or steak. 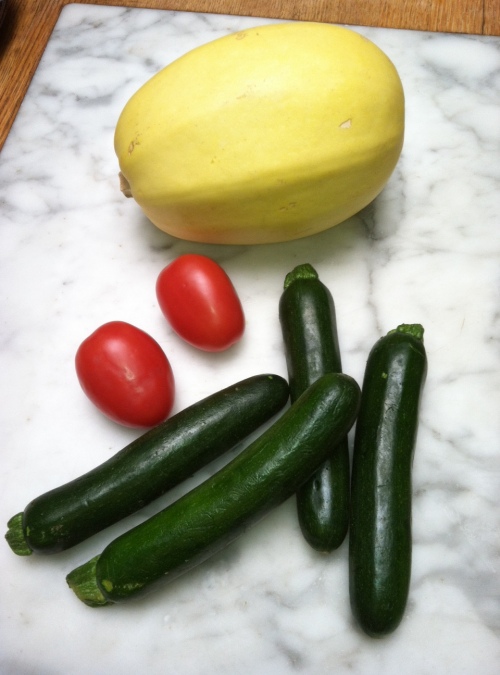 The smallish yellow spaghetti squash is at the top. It’s related to pumpkins and zucchini.

It’s hard to give up pasta. Many diabetics who don’t notice that their blood sugar levels spike too high when they eat pasta. What’s too high? In general, I’d say over 150 mg/dl (8.33 mmol/l) measured one hour after a meal, or over 130 mg/dl (7.22 mmol/l) two hours after the meal.

Other experts disagree and propose other numbers.

Spaghetti squash is a classic low-carb vegetable. If you’ve never tried it, you should. As vegetables go, it’s one of the largest, heaviest, and most interesting to prepare. Easy, too. The spaghetti squash season is autumn and winter in the northern hemisphere. Purchasing in spring and summer may be iffy.

In my part of the world, supermarket spaghetti squashes weigh between two and five pounds. We cooked a three-pounder (1.4 kg) that yielded five cups; a five-pounder (2.3 kg) gave us 12 cups. A serving size is one, maybe two cups. What you don’t eat immediately stays fresh in the refrigerator for at least several days. Re-heat by microwaving or stir-frying.

Like pasta and potatoes, the squash by itself is bland. It’s a great substrate for sauces or seasonings. 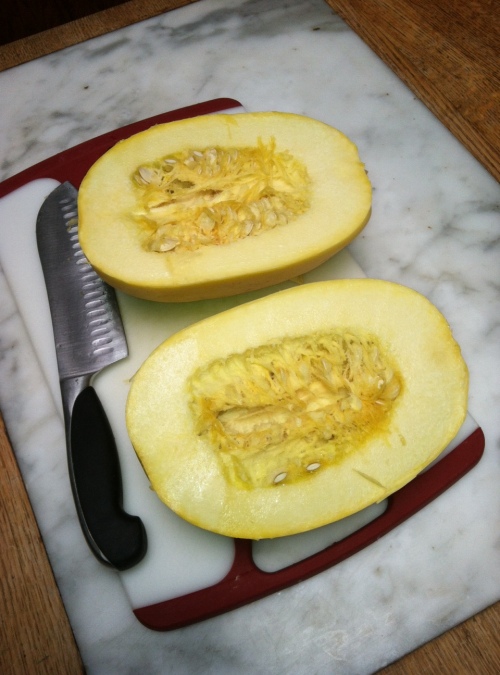 Raw squash cut in half lengthwise

Here’s how we cook it at the Parker Compound. Preheat the oven to 375º F 0r 190º C. Very carefully slice the squash in half lengthwise. Spoon out and discard the guts (seeds and membranes like a pumpkin; it even smells like a pumpkin). Put the halves flat-side down in a pan, then add a half inch (1.3 cm) of water to the pan. Cover with foil and bake until the outer shell (rind) is fairly easily pierced with a paring knife. This will be about 45 minutes for a two-pound squash (0.9 kg); 90 minutes for a four-plus pounder (2.3+ kg). Then turn them over, re-cover with foil, and cook 15 minutes more, until very tender. Remove from the oven and allow them to cool for a few minutes. Then use a fork to pull the strands away from the rind.

Other cooks simplify the process and just place the squash halves flat-side down on a baking sheet and cook for 30-60 minutes. Some leave the seeds in while cooking and spoon them out just before the stranding step.

Our first experiment was with l0w-carb spaghetti sauce. 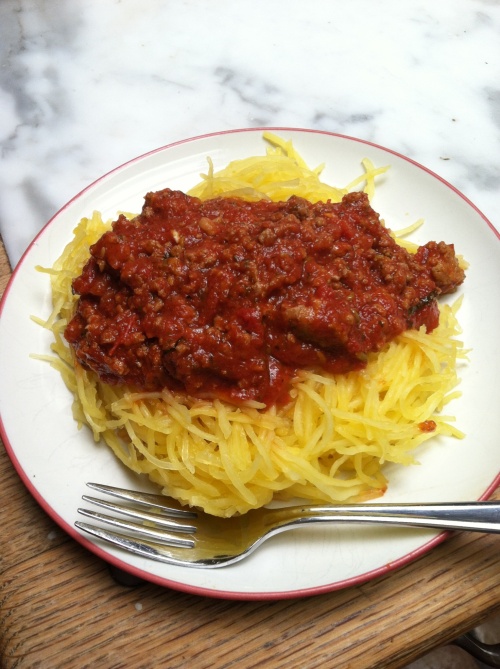 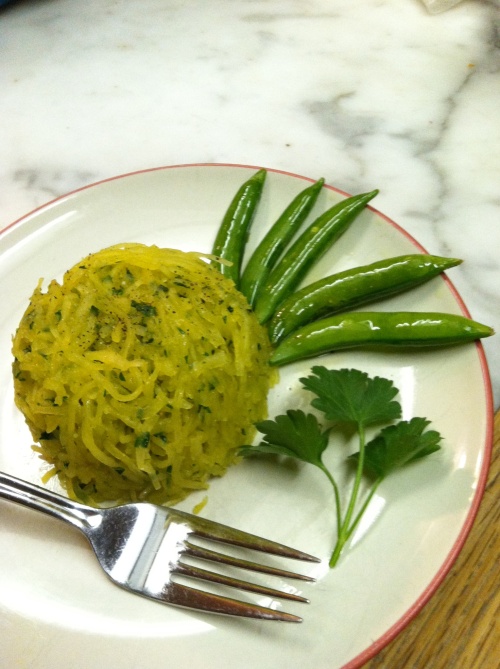 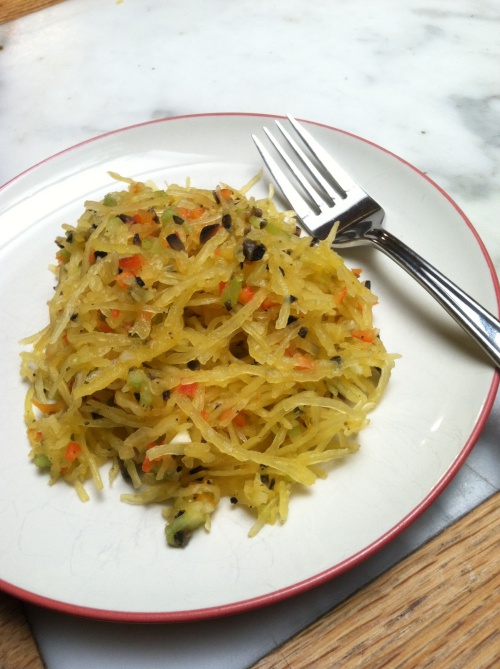 These last two options I consider side dishes. By the way, they taste good either cold or warm. They would go well with a number of entrees, such as steak or salmon.

I’ve read that this squash is good with pesto, or just with salt and (non-paleo) butter.

One cup of cooked spaghetti squash has 75 calories (I’ve seen 42 elsewhere), 10 g of carbohydrate, 2 g of fiber, 8 g of digestible carb, 4 g of fat (predominantly MUFA), minimal protein, and a fair amount of vitamins A, niacin, B6, and C. Plus 8% of your RDA for manganese. 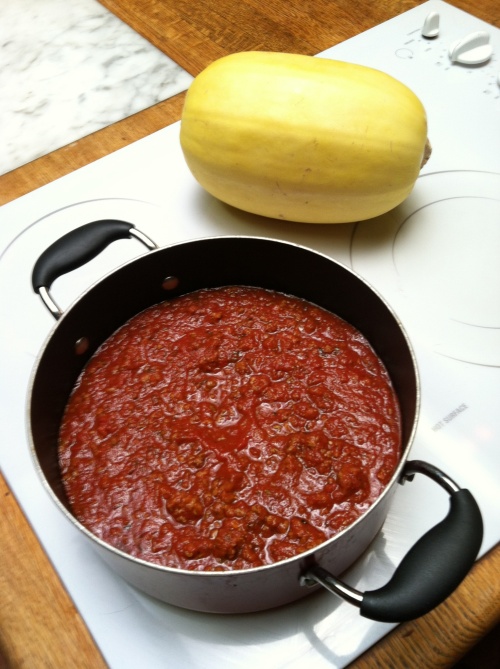 That’s a spaghetti squash in the background

My wife is Italian so we eat a lot of spaghetti at the Parker Compound.

A definitely non-paleo ingredient below is Truvia, a sweetener that’s a combination of stevia and erythritol. Stevia is supposedly “natural.” I don’t know where erythritol, a sugar alcohol, comes from. The purpose of a sweetener is to counteract the tartness or bitterness of the tomatoes. Honey would probably serve this purpose, but I’ve never tried it in this recipe. If you use the honey or table sugar option below, it will increase the digestible carb count in each cup by three grams. Whatever your favorite non-caloric sweetener, use the equivalent of two tablespoons of table sugar (sucrose).

Put the sausage, ground beef, onion, and garlic in a pan and cook over medium heat until well browned. Drain off the excess liquid fat if that’s your preference (not mine). You’ll probably have to transfer that mix to a pot, then add all remaining ingredients and simmer on low heat for two or three hours. You may find the flavor even better tomorrow. If it gets too thick, just add water.

To avoid carbohydrate toxicity—high blood sugar—eat this over spaghetti squash rather than pasta. Here’s a post on cooking spaghetti squash. Small or inactive folks may find a half cup of sauce over one cup of cooked squash is a reasonable serving (about 250 calories). I prefer to double those portions, making it a whole meal.

Sometimes I just eat this sauce straight. But I’m weird. A cup of sauce with some veggies or fruit is a meal for me. If you have other uses for spaghetti sauce other than over spaghetti squash or grain products, please share in the Comments.