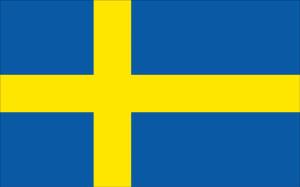 After menopause, body fat in women tends to accumulate more centrally than peripherally. This is reflected in a higher incidence of fatty liver disease, type 2 diabetes, and cardiovascular disease. A multinational group of researchers wondered if a modified paleo-style diet would have metabolic effects on healthy overweight and obese (BMI 28–35) postmenopausal women in Sweden, with particular attention to fat levels in liver and muscle. I’ll call this the Ryberg study because that’s the first named author.

Curiously, they never give the age range of the 10 study participants. Were they closer to 52 or 82? 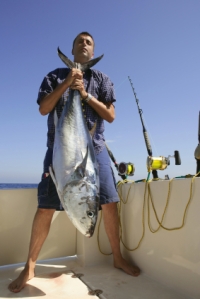 Has anyone even bothered to ask why the tuna are eating mercury? —Jim Gaffigan

The five-week intervention diet seems to have been mostly prepared and provided by the investigators, but they allowed for home cooking by providing menus, recipes, and a food list. No limit on consumption. The goal was to obtain 30% of calories from protein, 40% from fat (mostly unsaturated), and 30% from carbohydrate “…together with 40 g nuts (walnuts and sweet almonds) on a daily basis….”

“They were also advised to use only rapeseed [i.e., canola] or olive oil in food preparation.”

These women were sedentary before and during the intervention.

Carbohydrates consumption as a percentage of total calories fell from 49% to 25%. Total carb  grams dropped from 281 to 118, with fiber grams unchanged. To replace some of the carbs, the women increased their protein and fat calorie percentages by about a third. The authors don’t make it clear whether the total carb grams included total fiber grams. (I could probably figure it out if I had the time and inclination, but don’t.) “Before” and “after” fiber grams were 25 and 27, respectively.

In other words, “…the ratio between energy intake from the macronutrients protein, total fat and carbohydrates expressed as E% [calorie percentages] changed significantly from 16:33:50 at baseline to 28:44:25 after five weeks.” Total daily fat grams didn’t change, but the contribution of saturated fat grams fell. 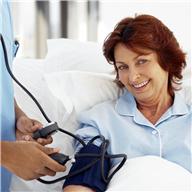 Elevated blood pressure is one component of metabolic syndrome

A 10-point drop in systolic blood pressure over the five weeks didn’t quite reach statistical significance (p=0.057), but the 9% drop in diastolic pressure did.

Fat (or lipid) content of the liver dropped by half. It was measured by magnetic resonance spectroscopy. Peripheral muscle fat content didn’t change, measured in the soleus and  tibialis anterior muscles of the leg.

The intervention diet was a reasonable version of the Paleolithic diet, with one exception. From what I’ve seen from Eaton, Konner, and Cordain, I think they’d agree. Except for the rapeseed oil. It’s fallen out of favor, hasn’t it?

Here’s what the Jaminet’s wrote about canola:

Canola oil…is rapeseed oil bred and processed to remove erucic acid and glucosinolates. During processing, the oil is treated with the solvent hexane and very high temperatures; it may also be subject to caustic refinement, bleaching, and degumming. [Perfect Health Diet, p.225.]

I can’t quite see Grok doing that.

My fantasy about extra virgin olive oil is that it simply oozes out of the olives when pressure is applied. So easy a caveman could do it.

Eaton and Konner have argued that our ancestral diet would have had at least two or three times the fiber as was provided by this diet. But that would have been at a total daily calorie consumption level of at least 3,000 or 3,5oo back in the day. So this diet isn’t so far off.

The 10 lb (4.6 kg) weight loss is impressive for an eat-all-you-want diet. Calorie intake dropped spontaneously by 500/day, assuming the numbers are accurate. The satiation from higher protein consumption may explain that. The authors admit that the women lost more weight than would be predicted by the energy balance equation (i.e., a pound of fat = 3,500 calories). They wonder about over-estimations of food intake, thermogenic effects of protein versus other macronutrients,  and loss of glycogen (and associated body water). You can’t argue with those scales, though.

While serum C-peptide didn’t fall, urinary levels did. (My sense from reviewing other literature is that 24-hr urine levels of C-peptide are more accurate indicators of insulin production, compared to a single fasting C-peptide level.) The authors interpret this as increased insulin sensitivity in the liver in combination with decreased insulin secretion by the pancreas. Fasting serum insulin levels fell from 8.35 to 6.75 mIU/l (p<0.05).

Blood lipid changes were in the right direction in terms of cardiovascular disease risk, except for the drops in HDL (from 1.35 to 1.17 mmol/l) and ApoA1.

This study may or may not apply to men. Also note the small sample size. Will these results be reproducible in a larger population? In different ethnicities?

I like the reduction in blood pressure. That could help you avoid the risk, expense, and hassle of drug therapy.

I like the drop in fasting blood sugar from 96 to 90 mg/dl (5.35 to 5 mmol/l). It’s modest, but statistically significant. Was it caused by the weight loss, reduced total carb consumption, paucity of sugar and refined starches, lower total calories, higher consumption of protein and mono- and polyunsaturated fats, or a combination of factors? As with most nutritional studies, there’s a lot going on here. A small fasting blood sugar drop like this wouldn’t matter to most type 2 diabetics, but could diabetics see an even greater reduction than these non-diabetics? Only one way to tell: do the study.

I can well imagine this diet curing some cases of metabolic syndrome, prediabetes, mild type 2 diabetes, and fatty liver disease.

Most type 2 diabetics (and prediabetics, for that matter) are overweight or obese.  If a diet like this helps them lose weight, it could improve blood sugar levels. Nearly all authorities recommend that overweight and obese diabetics and prediabetics get their weight down to normal. (I admit that weight loss and improved blood sugar levels are not always in sync.) Weight loss by any standard method tends to improve insulin sensitivity.

This modified Paleolithic-style diet doesn’t include table sugar or refined grain starches. That would help control blood sugar levels in both type 1 and type 2 diabetics and prediabetics. The authors didn’t say so, but this must be a relatively low-glcemic-index diet.

The investigators don’t mention ramifications of their diet for folks with diabetes. Their focus is on ectopic fat accumulation (in liver and muscle) and its linkage with insulin resistance and cardiovascular disease. They’ve put together a promising program to try on diabetics or prediabetics. They just need the will and funding to git’r done.

I agree with the authors that the lower calorie consumption, rather than the paleo diet per se, may have caused or contributed to the reduction in liver fat. 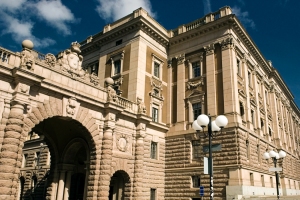 The investigators wonder if a Paleolithic-style diet like this would be beneficial over the long-term in patients with non-alcoholic fatty liver disease (NALFD) and associated metabolic disturbance (e.g., impaired sensitivity sensitivity in the liver). NAFLD tends to predict the development of diabetes and cardiovascular disease. If we can prevent or reverse fatty liver, we may prevent or reverse type 2 diabetes and cardiovascular disease, to an extent. You’ll be waiting many years for those clinical study results.

But you have to decide what to eat today.

A very-low-carb diet is another way to reduce liver fat, and it’s more effective than simple calorie restriction.

PS: See Carbsane Evelyn for her take on this study here and here.

PPS: Urinary C-peptide secretion reflects insulin production. HOMA is a gauge of insulin resistance, much cheaper and quicker than the purported “gold-standard” hyperinsulinemic euglycemic clamp technique. Why HOMA and the clamp technique in this study didn’t move together is unclear to me, and the authors didn’t explain it. School me in the comment section if you can. Click this HOMA link and you’ll find this statement: “HOMA and clamps yield steady-state measures of insulin secretion and insulin sensitivity in the basal and maximally stimulated states, respectively. HOMA measures basal function at the nadir of the dose-response curve, whereas clamps are an assessment of the stimulated extreme.” Maybe that means HOMA is applicable to the fasted state (no food for 8 hours), whereas the clamp technique is more applicable to the hour or two after you ate half a dozen donuts.